The viol (viola da gamba) is a bowed string instrument which was loved in the courts, churches, and homes in Europe during the sixteenth to eighteenth centuries. Its ancestor appeared in Spain and Portugal, then evolved into the form as it is today and became very popular in Italy, France, Germany and England.

The word “gamba” means leg in Italian. The instrument has three sizes: bass, tenor, and treble, in charge of human voices bass, tenor, alto and soprano. All of them are held between the legs, which is why the instrument came to be called the viola da gamba. During the same period the violin family of instruments came into being; they are held in the arm (braccio).*

* One holds the cello between the knees, since its size is too big to hold in the arms. 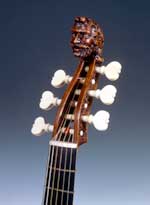 During the Renaissance era, composers for the viol wrote polyphonic, or consort, music. They also explored instrumental-specific idioms through virtuoso diminutions. Later, in the Baroque Era they used the viol as a solo, ensemble and basso continuo (accompaniment) instrument. Viol was played with recorder and harpsichord, other so-called early music instruments.

The gamba is superior to instruments of the violin family in making chords or harmony because of its structural merits, including the greater number of strings. However, the lack of large sound caused the decline and eventual eclipse of the viol; it was not suitable for the music of the Classical or Romantic periods. At the end of the nineteenth century viols once again attracted attention.

In Japan, viols reappeared in novels of the 1920’s. After World War II they were widely reintroduced. Today, the numbers of both professional gamba players and amateur players are increasing.

Viols were first brought to Japan by Jesuit missionaries who used them in place of the organ to support the singing of masses in 1561. The following year the Christian daimyo Otomo Sorin was invited to a missionary’s house in Ohita (Kyushu) and listened to viols played by youths after a banquet, according to reports by the missionaries Luis Frois and Almeida. They also reported that in 1581 Oda Nobunaga visited the Seminario in Azuchi (near Kyoto) after falconry and heard viol playing there. In 1591 Toyotomi Hideyoshi met four youths who had returned from visiting Europe as diplomatic missionaries, and heard them play the viols in the Jurakudai castle (Kyoto).