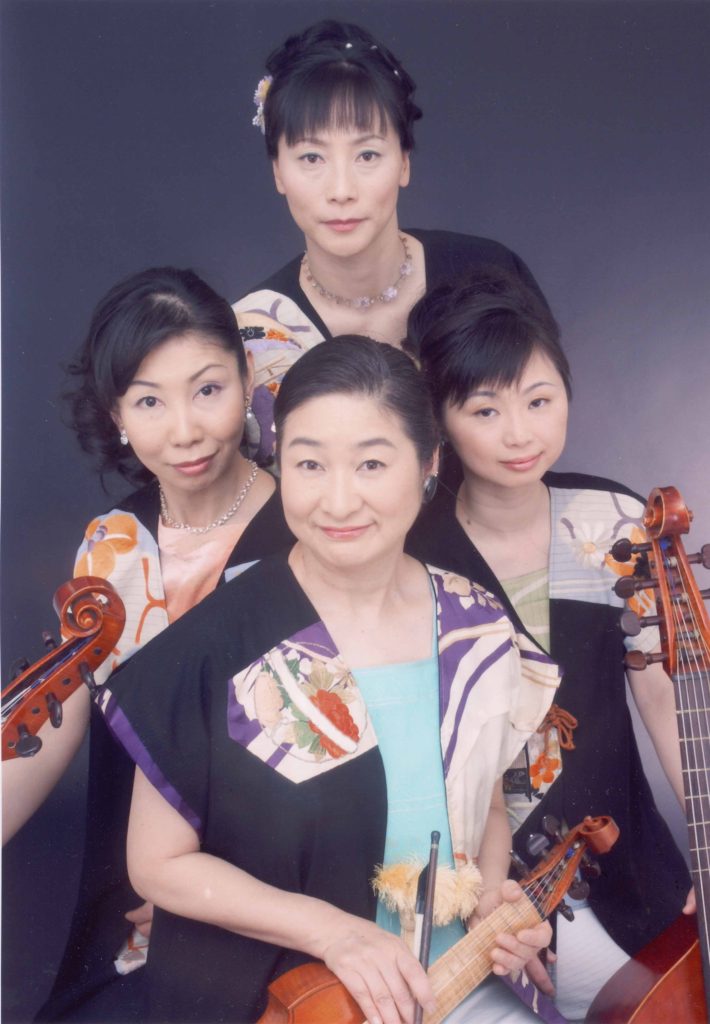 Under the direction of Ms. Yukimi Kambe, the Yukimi Kambe Viol Consort (YKVC) was organized in 1983 in Tokyo. YKVC performs both European Renaissance music and world contemporary music, actively expressing stylistic diversity. YKVC features creative programming and performance grounded in cultural traditions of both East and West. Its activities include concerts, recordings, broadcasts, educational outreach, “Laboratory” for composers, performances for historical dance and for competitions. Consort members attend festivals and conclaves. In addition to many Japanese tours, YKVC have made two European tours and eight in the U.S., the most recent one in 2006 a great success.

YKVC have performed more than 400 concerts, including programs of a single composer: Jenkins, Purcell and J.S. Bach. They are equally dedicated to modern composition, performing more than 130 contemporary works since the consort’s inception. About 80 works are new compositions for viols, written for the ensemble and entrusted to the ensemble for the premieres.
See the list of Premiere Performances in the Electronic Press Kit (PDF file).

The ensemble has three CD recordings:

“Buffet delle Quattro Viole da Gamba” (YKVC 0201) which comprises early works and contemporary Japanese compositions for viol consort, “Foglia d’olivo, works for viols by Tsutomu Mizuno” (YKVC 0302) which is the first recording ever consisting entirely of viol works by a single contemporary composer, and the newest CD of an all Bach program “Ja, doch BACH mit Gambenconsort” (YKVC 0503). They have also performed on other CD recordings.

The 2006 concert tour of eleven American and Canadian cities for five weeks (*), the 2004 concert tour in North Carolina, California and Hawaii, the 2002 concert tour of seven American cities extended over one month (*) and the 1997 concert in Boston; the 2004, 2000 and 1988 concerts at the VdGSA Conclave in Seattl -Tacoma, Portland and Los Angeles (*); the 1992 concert at the Kyoto International Music Festival (Kenninji Temple); the 1991 concert tour of Paris and eight North German cities; the 1990 joint concert with the New York Consort of Viols at the Berkeley Festival and Exhibition (*); the 1989 performance in “The Funeral of the Emperor Showa” television program in Tokyo and the 1986 and 1984 performances at the first two Composition Competitions, for Viol Consort Music, organized by the Viola da Gamba Society of Japan in Tokyo.
(*) supported by The Japan Foundation

The members of the consort are Yukimi Kambe, Eriko Ozawa, Maki Noguchi, Kaori Hashizume and Ichiko Tsubota (who is active only in Japan). In addition to their participation in the consort, each member individually pursues various performance activities of early and contemporary music. The members also teach viol at academic institutions, private studios and workshops.

Yukimi Kambe (Director) After graduation from the Schola Cantorum Basiliensis studying with Hannelore Müller, she studied with Wieland Kuijken in The Hague. Lecturer, Kunitachi College of Music, Tokyo, and Ferris University College of Music, Yokohama. President, the Viola da Gamba Society of Japan (1983 – 84).